WHY SPIDERS HIDE IN DARK CORNERS

Brother Ananse liked tomatoes best of all the good things that grew in his garden. “Next you must find a box to put me in,” he continued. “It must be big and have a cover that is easy to lift. Place the box in the hole, and into it put some spoons and knives and pots so that I can feed myself in the next world.”

Brother Ananse’s wife and his two sons carried out each order carefully.

One day, not long after this, Brother Ananse out on the ground in the sun.  He shut his eyes and did not move. He remembered to hold his breath when anyone come near him.  In every way, he pretended that he was dead. But, of course, he wasn’t.

Carefully they lifted Brother Ananse from the ground and placed him in the box beside the tomato patch.  When the cover was back on the box and the hole covered lightly with straw, they stood in a circle around the hole in the garden.  They sang, and they prayed, and they beat on their drums and their cultural dance.  Everyone was sad.

Brother Ananse did not mind spending the day in his box underground. He liked sleeping, and he enjoyed thinking of the trick he was playing on everyone. Night come. Brother Ananse’s friends had gone home to the village. His wife and sons were asleep in the banana-leaf house. The full moon was high in the sky. Everything in the garden was quiet.  Can you guess what Brother Ananse did then?

Very quietly he lifted the cover of the box. Very quietly he pushed aside the straw which covered the hole and peeped out.  He looked around to see that all was safe. When he saw that everyone was in bed, he crawled out very slowly.

When he had everything he needed, Brother Ananse crawled back into his box and cooked himself a fine dinner, yams and mazes, but not fufu.   He went on eating for the rest of the night.

The moon disappeared, and the sun came up. Brother Ananse did not see what was happening. His full stomach had made him very sleepy. He went on sleeping all through the next day.

Each morning Brother Ananse’s wife walked out to look at her garden. Each morning she saw that something was very wrong. A thief was stealing her best vegetables. The best oranges and bananas were missing from the trees. Her best cock had disappeared from the hen yard. She must think of a way to catch that thief.

She sat down on a low stool by the door of the banana-leaf house to think. She, too, had a grand idea.

First she gathered a great pile of straw. Out of the straw, she and her two sons made a man that looked just like a real man. Then they got a pail of soft sticky beeswax and covered the straw man from head to foot. They but him in the middle of the tomato patch. That night, as soon as everyone was asleep, Brother Ananse crawled out of his hiding place. He was just about to help himself to a ripe tomato when he saw a man standing in the middle of his garden. He forgot all about being quiet. “Who are you?” he shouted. “What are you doing in my garden?”  The man did not try to explain. He just stood.  “So you won’t answer!” cried Brother Ananse. “I will see about that. I will change your mind for you” Still the straw man said nothing.  “Do you think I am joking?” yelled Brother Ananse, and with that he hit the straw man with one hand.  His hand stuck fast in the beeswax.   No matter how hard he pulled, he could not pull his hand away.  “You think you are clever! I will show you!” shouted Brother Ananse. With that, he hit the straw man with his left hand and that stuck fast too.  “Do you think you can get the better of me?” yelled Brother Ananse.  He gave a mighty kick with his right foot, and his foot stuck to the straw man too.  “Let me go!” he shouted.  “Haven’t you learned anything  yet? Well then, “I will have to give you another kick.”

Brother Ananse kicked the straw man again, and that foot stuck too. He kicked and hit until all his hands and feet were stuck fast.

“I will show you yet!” shouted Brother Ananse, and he butted the straw man with his head. There he was stuck in the beeswax from head to foot. The next morning his wife and his two sons came out to the garden, hoping to catch the thief.  Imagine their surprise when they saw Brother Ananse stuck to the straw man. At once they understood everything.

“Thief! Thief!” cried his wife and sons, as they pulled Brother Ananse away from the straw man. “Thief! Thief!” they yelled, as they dragged him along with them down to the village.

Soon everyone knew who the thief was. The people laughed at Brother Ananse and made up songs about him.  Just as they were about to drag him before the headman of the village, Brother Ntikumah to see what should be done with him, Brother Ananse broke away from the crowd. He crawled into a nearby house.  He crawled up into the darkest corner under the roof to hide, and he has lived there ever since, and that is why, even today, Brother Ananse like to hide in dark corners. 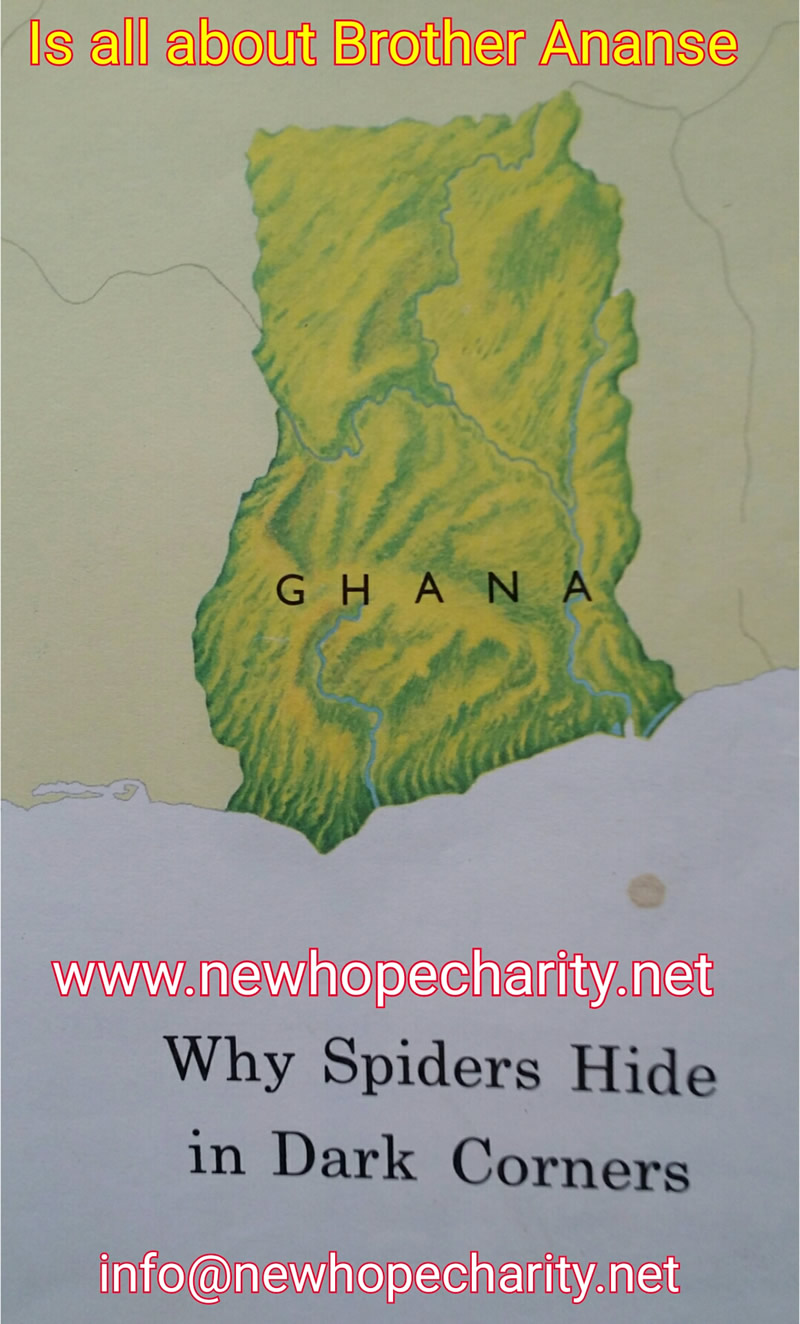